In India "Ardhanarishwar" takes a important place in mythology and philosophy. The term translates to half man - half woman. But this is a symbolism to show that if you evolve in your ultimate context, you will be half a man and half a woman – not a neuter – a full-fledged man and a full-fledged woman. That is when you are a full-blown human being. You are not skewed development, you are not just masculine or feminine, you have allowed both these things to grow. Masculine and feminine does not mean male and female. The “feminine” and “masculine” are certain qualities. Only when these two qualities happen in balance within, can a human being live a life of fulfillment.
However inspite of treating "Ardhanarishwar" as a philosophy of life, the real transgender community in the country have always been treated as outcasts. They have faced hostility and resentment as their gender is not held in accord with the "so called" normal society.. With an exception of a handful, such exclusion, have forced them to turn to begging and prostitution to earn a living. The Indian transgenders’ struggle for day-to-day survival and basic human rights.

The Aravan Festival festival may be is that rare place where the Indian transgenders find some dignity and feel of basic human rights. Here they can embrace their identities in a public setting. Each year, on the first full moon day of Tamil month of Chitirai (April-May), a small temple in a small village called Koovagam in Tamil Nadu state of southern India plays host to an interesting ceremonial ritual, observed by the transgender people. The presiding deity in this Koovagam temple is Lord 'Aravaan' or 'Iravan', as he was called in the epic Indian narrative - Mahabharata.
To have a better insight on this ceremonial ritual, one needs to look back at a particular incident in Mahabharat. Aravan was the son of Arjuna born to him through the Naga Princess Ulupi. In Mahabharata, when Krishna seeks to find what are the good omens and the 'must do' things to enable the Pandavas to win the Kurukshetra war against the Kauravs, he was told (presumably by Sahadeva), that a sacrifice of a perfect male to Goddess Kali is in order for the Pandavas to win the war. Krishna determines that there are 4 people who are best suited for the sacrifice: Krishna himself, Arjuna, Shalya and Aravan. Aravan volunteers for the sacrifice, and in return is granted a dying wish. Before offering himself for sacrifice, Aravan wanted to die a married man. This wish presents a dilemma to Krishna. Which woman would consent to be willing to be married to a man for a day and embrace widowhood a day after? Krishna solved this by taking the form of Mohini. He marries Iravan and she shows him the pleasures of union. When Iravan lies dying, it is said that Mohini cried, lamented, wailed and bereaved for him like no wife would do for her husband. Seeing this Aravan died a happy man. 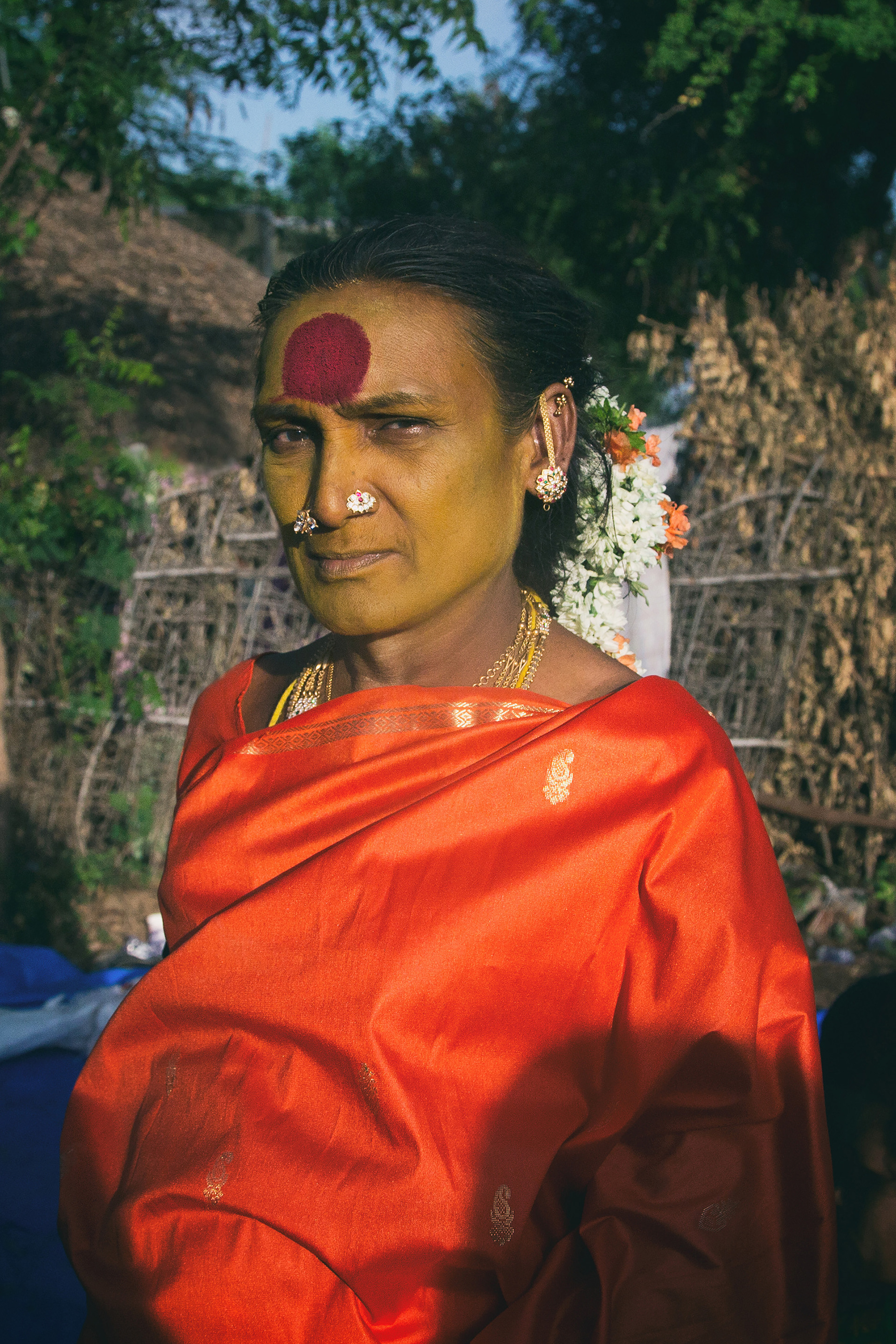 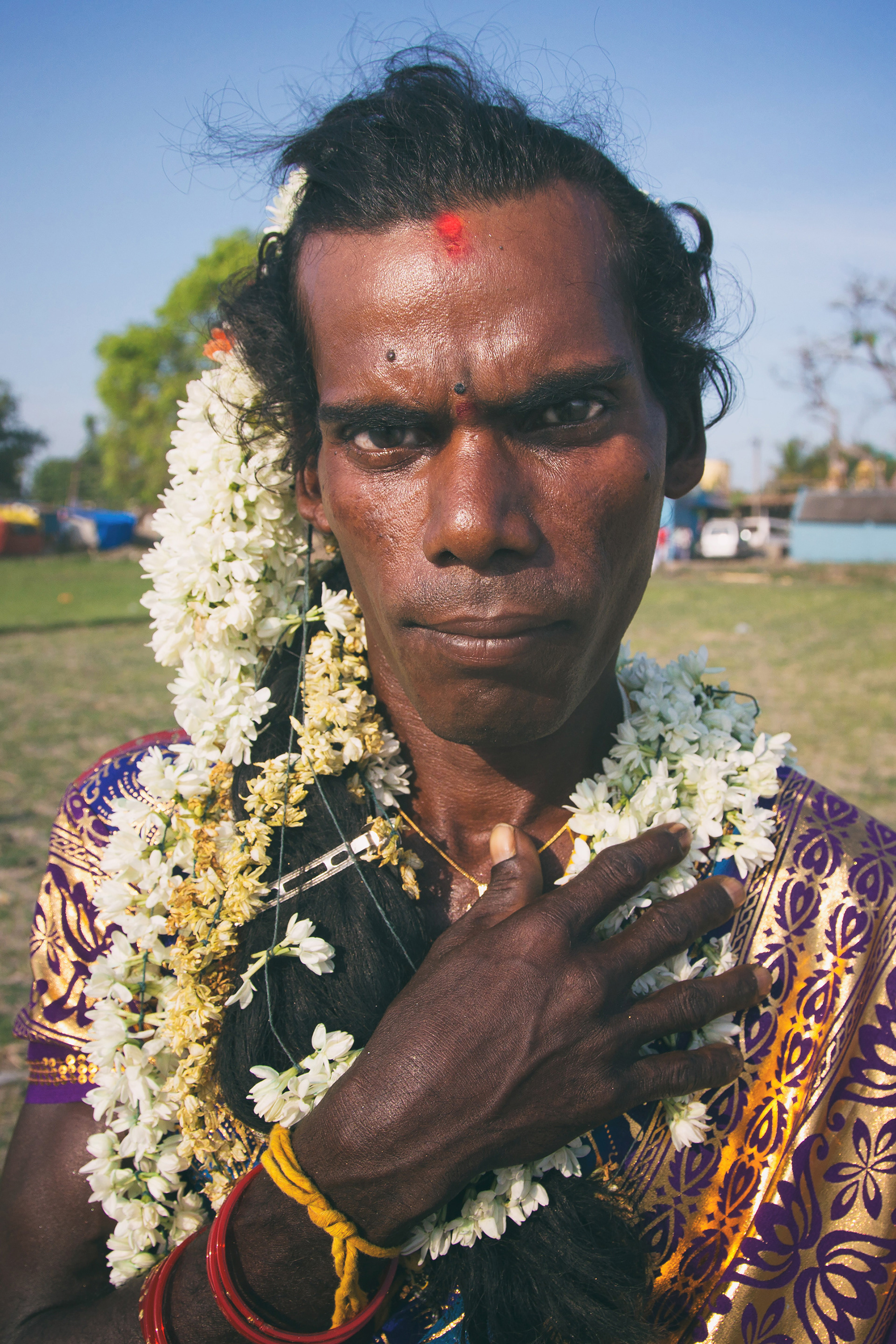 Many in the transgender community identifies themselves with 'Mohini' - the female form of Krishna as a woman trapped inside a man's body and consider Lord Aravan as their eternal husband and worship him. In this festival, on the day when Mohini married the lord, the priest of the temple, on behalf of Aravan, ties the 'thaali' or 'mangalsutra' to the Aravaanis and binds them in the relationship of marriage. The next day, on the day Aravan was sacrificed, 'thali arutthal' or the rituals for widowhood are followed, which include snapping of thaali and breaking of the bangles to signify widowhood. The 'Aravaani's' wear white saree and lament over the death of Aravaan, just like Mohini. This is done on the day which coincides with the last day of the Kurukshetra war.

On the first day, the place gets colourful with the sight the gorgeous sarees and sounds of songs & laughter fill the air, as the transgender community dresses up to be like the beautiful Mohini. They take their time to look their very best with elegant sarees, ornaments and flowers.

As the sun start to settle on the western skies, they make their way towards the temple in bridal attire. Their elders dances on the frenzied beats of dhak (drum shaped Indian membranophone, played with wooden sticks). These rare moment of getting importance and respect on this day is perhaps priceless for them, and same gets reflected on their face.

The interior space of the temple is small and dimly lit. It gets crowded quickly with everyone queuing up, first to worship lord Aravan and then to get married to him. The ritual of marriage is done by the purohits, who, on behalf of Lord Aravan, ties an yellow thaali (turmeric coated yellow thread) around their neck, which symbolizes the "mangal-sutra" - the sacred thread that identifies one as a married woman.
This simple ritual holds a great importance. In a country, where the transgender community is deprived of most of their basic rights, this ceremony kindle an environment where the transgender people are treated as "normal" human beings.

As a symbol of marriage. a temple priest ties the sacred yellow thread around Biju.
Biju is one of the few, who have come from Mumbai, where he works at the traffic signals, seeking alms from passing cars.

Top - Kriti and Revti, poses for a photograph. They have come from Chennai, where they work as sex workers.
Below - Shilpa, who came from Vizag, joyfully shows off her sacred yellow thread.

As the night grows, so does the sound of music, laughter and merriment. On the streets, the Aravanis celebrate deep into the night, their joy getting wilder by the hour. Local people too join in the festivities and perhaps for a night the social boundaries that outcast the transgender community fall apart.

The next morning, as the sun rises, the environment changes completely. Aravan got married the day previous to his sacrificial beheading, and thus today, early morning, at the time, which is known to be the hour when Aravan was sacrificed, the transgender people come out.
Sounds of grief start to metastasize as the Aravani's, many still in their bridal attire, walk down to a field near the temple, clapping in their traditional style. Some sings sad songs of Aravan's sacrifice.

Heaps of camphor blocks are set on fire, which symbolized Lord Aravan's cremation after death. From this fire small burning blocks are camphor are collected and preserved. The small pieces are treated as reminiscent of lord Aravan and are worshiped.

The place fills up with scenes of grief. The sudden change of scene seems dramatic but in fact, the whole ceremony is not only a mere re-enactment of Aravan's story - the Aravanis connect to it deeply and they truly lament just as Mohini did so that Aravan can die happily after he was sacrificed. Previous day's sound of fun and frolic changes into that of wails and sorrow.

In a field near the temple, priests snap their sacred thaali (the yellow thread) and break the bangles off their wrists, a ritual symbolizing the mark of widowhood. The thread and the bangles  - the marks of marriage are then thrown into a fire.

As the final mark of widowhood, before leaving, the Aravani's change themselves to white clothes. Here at this festival, the transgender community are visible without judgement.